One week ago I got on a plane that brought me 11837 kilometers away from home.

A few days passed since then, but a lot of things happened. It feels like I’ve been away for weeks, for one thing because the days were really long, several things had to be organized… on the other side because there is a twelve hour difference between Germany and Hawaii. When a day in Germany ended, stories could be told – and I was sleeping. I’ve heard of them when I woke up. While I am awake – all my friends are sleeping. Constantly being in contact with them, it felt as fourteen days had passed, not seven. Imagine the same day happens twice.. time shift is a weird thing. The first four days were really hard as I had to adapt to the time zone and had a badass jet lag. Even after one week I still get tired very early and to date I couldn’t manage to sleep longer than six a.m.

The first day I woke up around five a.m., got off the bed and went to the beach directly. As I arrived in Honolulu at nighttime, I couldn’t really see any of my surrounding. Being at the beach for the first time was magical. The sunrise, palm trees, birdcalls, my feet in the sand, the ocean breeze through my hair – I had been waiting for this since last October. I was standing at a pier in Waikiki and despite I was incredibly tired I couldn’t stop smiling. After having a pretty stressed last week in Cologne (my to do list was never ending) I was intensely happy and overwhelmed to be in Hawaii and experience the beauty of nature. 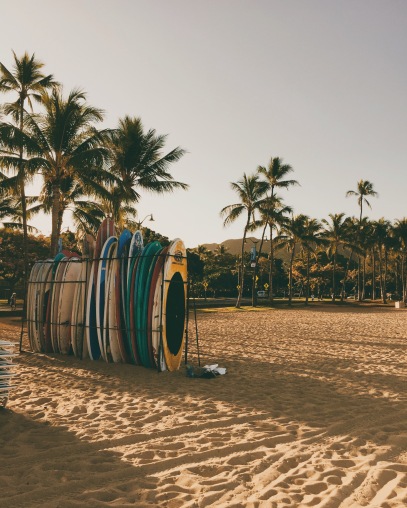 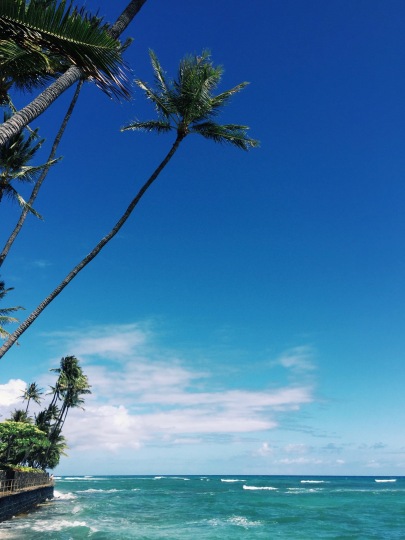 I booked four nights in a Hostel located only a block away from the beach and was hoping to find an apartment or any permanent place to stay as soon as possible. Looking for a room to rent proved to be quite hard as it is about three times more expensive than in Germany and also a lot of people on web portals don’t seem to be trustful at all. Some landlords require cleaning and/or cooking in exchange for rent, others became apparent as nudists or scammers. On my second day in Hawaii I started to visit some rooms as University would start the upcoming week and I was hoping to be settled until then. I visited a guy who owned a beautiful treehouse located in Manoa, an area close to the rainforest and waterfalls. I fell in love with that place, until all of a sudden he wanted me to give him over 1300$ cash without even signing a contract. At this point I recognized I got scammed and canceled the whole thing (I packed all my stuff and was about to move in that night). 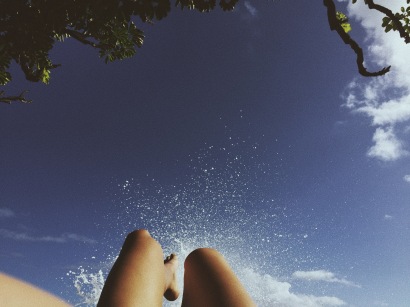 I went back to the hostel, crestfallen, and checked in again. By chance two guys from the hostel wanted to look for an apartment too, we talked about it, found a nice flat and rented it for the next week. Everything was fine, until they got into a fight, and moved out the next day, leaving me in the apartment. I couldn’t believe this was actually happening to me, but the big problem was that I payed everything and I’m pretty sure I won’t see the money they owe me ever again. So this was the second failure. A lot of things like these occur in Hawaii, I talked to some nice local people I met and there is one thing all of them said: First, if a thing seems too good to be true – it most of the time is. Second, Hawaii seems to be paradise for a lot of people, especially tourists or visitors from a foreign country, but a lot of bad things as scams tend to happen here every day. Probably this happened to me as I was a bit naive, as well I am a very indulgent person, I always see the good in someone and can still not believe why people act like this. Luckily I experienced this at the beginning of my stay, I don’t trust anyone know without signing some papers and everything that has happened won’t keep me from staying positive.

On my way to Diamond Head

How beautiful is this?

Now for the good things: I am absolutely in love with Hawaiis nature (of course I haven’t seen a lot so far) and I am in love with the Aloha vibe – everyone seems relaxed and not stressed at all, busses are always late.. but no one cares. I am in love with the food as several tropical fruits have their home on the islands, and I am in love with the light rain that all of a sudden moistens your face. Hawaii has different climate zones, at the beach it’s always sunny, in the mountains it’s raining most of the time. It’s a great spectacle watching massive dark cumulus clouds racking down the hills and dissolving into dainty ones at the beach.

I spent my other days taking some walks around Diamond Head (one of the emblems of Honolulu) and at the beach, enjoying the sun after having a never ending winter in Germany. Hawaii is great for exploring waterfalls and hikes but I’m planning on doing this on the next weekends. At nighttime some people of the hostel got together, we had some drinks and strolled around. One night a group of almost ten people sneaked into expensive hotels and went into their pools. We had wine while sitting in a jacuzzi. No one noticed and we had a lot of fun. 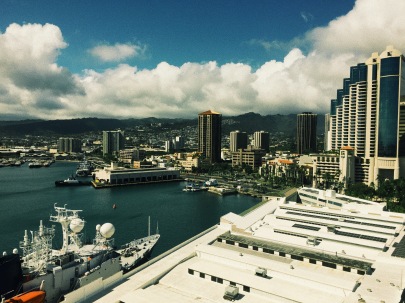 At the end of this week I will finally move in into a flat share with Stefon, a guy from Washington who also studies in Honolulu. It will be a big relief for me to eventual unpack my stuff and stay there for the next four months.

A few weeks ago my flatmates organized a barbecue at our apartment in Cologne. Some friends came over, it was a nippy but pleasant evening with wine and tasty food. By chance I got to know Shane, an English guy from Northampton. Later we started talking and both realized we absolutely were in tune with each other – we have the same taste in music, same kind of job and tinker with similar issues. I love these moments in life when you meet people out of the blue, under strange circumstances and you just get along very well.

We kept in touch and a few days later he asked me if I wouldn’t want to visit him in England for a few days. I checked my diary and looked up some flights on the internet. The flights were affordable and I booked a flight to London spontaneously. I spent the following days in Shanes flat share in Northampton, a sleepy and cosy townlet located about one hour away from London. He lives in a house with 9 people, I got to know some of them, especially Emma – an artist who grew up in Germany and showed me some of her art. 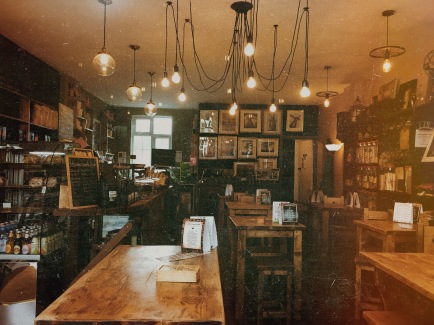 View into a backyard

In Northampton we had English tea, a traditional meal made up of sandwiches, scones, cake and tea or coffee. We strolled around the city, went to see the opera, visited a second hand shop where I bought a corduroy dungaree and had a delicious indian dinner. On Tuesday it was raining (what a surprise) but nevertheless we took a walk through the park. In the evening we made a little pub-crawl. We drank a lot of cider – I have to say cider tastes so much better in England than in Germany! Combined with chilli cheese chips it’s absolutely delightful 🙂 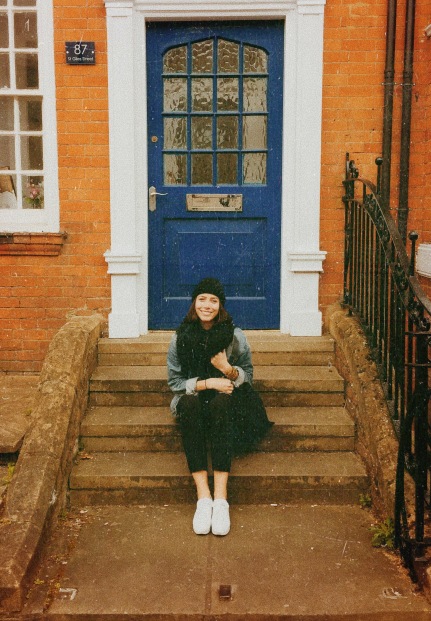 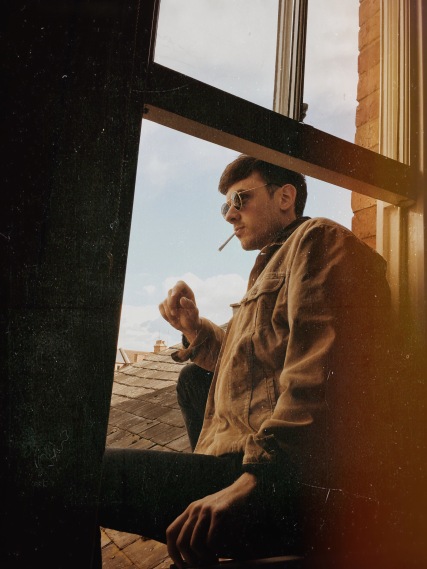 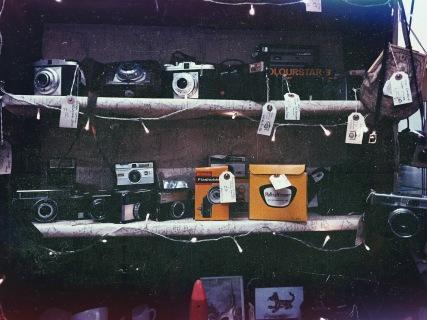 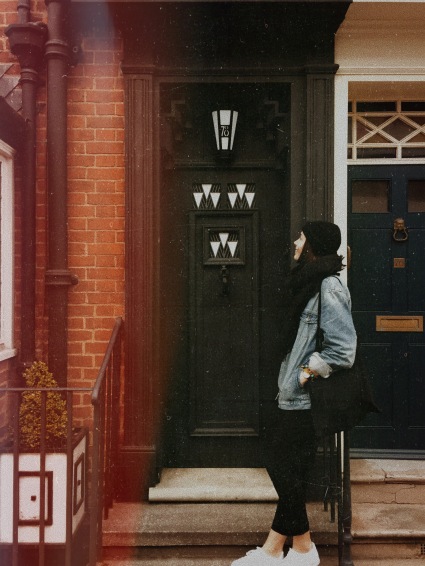 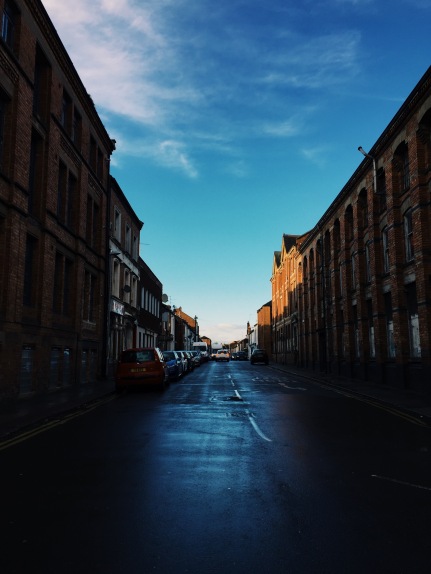 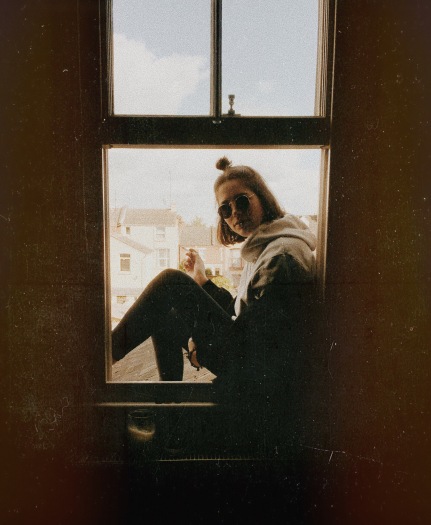 I spent another day in London. As I didn’t want to carry my backpack the whole day I locked it at London Euston train station and travelled by rail into the city center. I got off the train in Shoreditch and walked straight into some second hand shops. Haphazardly I came by the ‘Absolute Vintage’ shop (15 Hanbury Street) which is a huge boutique, especially appropriate if you’re looking for bags or jackets. Another one I can recommend is ‘Blitz’ (55-59 Hanbury Street). Blitz is not too expensive and I bought two vintage shirts there.

In love with dungarees

At the end of the day I drove to Tottenham where my hostel was located. My roommate was a polish girl who lost her apartment a few weeks ago and transitionally lives in hostels around London. We had a really long and worthwhile conversation. The talk with her was the best possible ending of my trip to England. Sometimes it’s incredibly inspiring to talk to someone you never met, without any judgmental or biased attitude – and however or just because of this fact you break open.

I always have and probably always will have this yen to see distant places, even if it’s a trip to a country near by. Four days in England convinced me once again that spontaneous and unexpected journeys are the best ones… and you always get home with some priceless souvenirs: a lot of memories and good feelings.

‘Antes tarde do que nunca’ –  better late than never. Finally I made it to Portugal, since I wanted to go there for a longer time now. Two weeks ago my sister and I catched a plane to Porto. Through some funny misunderstanding I accidentally booked the wrong hostel for the first two nights, assuming the hostel was in Porto, but it actually was in Lisbon. For this reason we arrived in Porto and got on the train to Lisbon directly. While waiting for our train an older portuguese man invited us for a coffee. He also wanted us to visit him in his small hometown in an rural area of Portugal but we didn’t make it. Such a nice welcome!

On the train to Lisbon 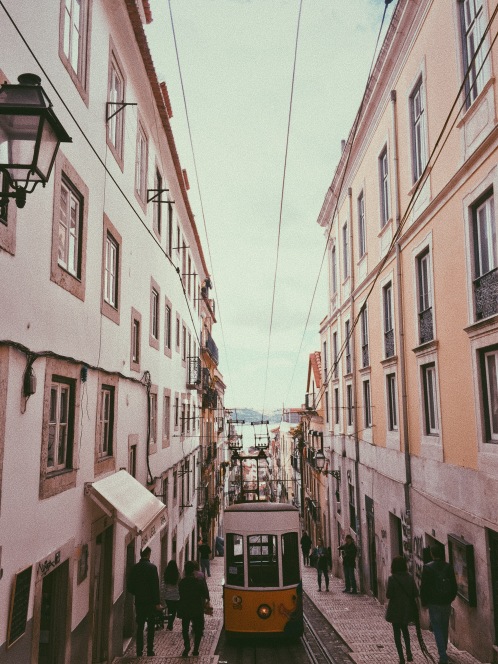 The most touristic photo ever – but I love it!

Lisbon is one of the most beautiful cities I’ve ever seen. I fell in love with the small and steeply streets, orange trees, beautiful buildings, street cats, tiny cafés and nights next to the river. The people there are very warm-hearted. We had a tasty meal at a vegan buffet place called ‘Jardim des Cerejas’ and went to a big flew market – it’s called ‘Feira da Ladra’ and happens on Tuesdays and Saturdays. By chance we walked down a street and came across Markus, a guy we know from Germany. Later we met him to spend the evening together. It’s a small world!

After three days in Lisbon we went back to Porto. We met some amazing people in our hostel, listened to bad music and drank a lot of port wine and ‘Superbock’ – the best bottled beer in Portugal. On our last day we visited a buddhist tea place, had some jasmine tea and bought handmade portuguese shoes in a small shop. They were pretty expensive but it feels good to support local people instead of big brands, and at least we now have an unique souvenir. 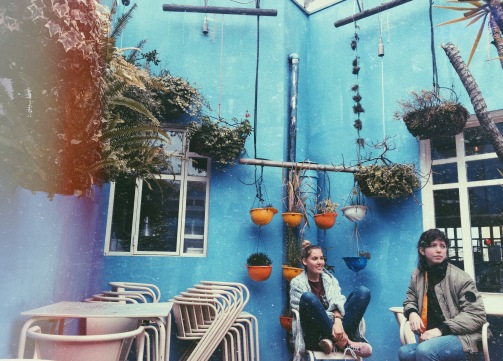 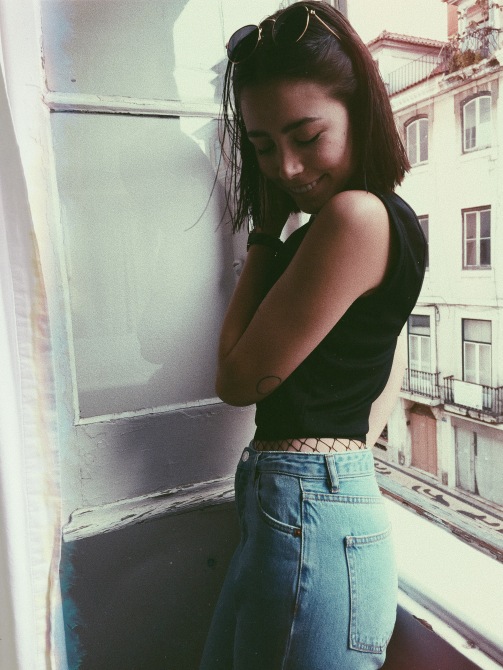 Mornings at the hostel